Kirsten Banks is a proud Wiradjuri woman. Growing up on the Northern Beaches of Sydney, Kirsten always had a fascination with the sky and after graduating from Davidson High School in 2014 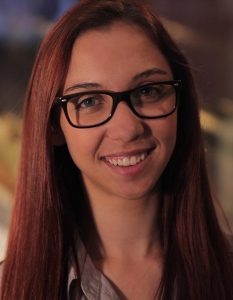 she pursued a Bachelor degree of Science with a major in Physics at the University of New South Wales. Within her first year of tertiary study, Kirsten was awarded an Astronomy Educator position at Sydney Observatory. It was at Sydney Observatory where Kirsten first sought out to determine where she and her ancestors came from. She learned she is of Wiradjuri descent. Since discovering this, Kirsten has been developing her knowledge in Aboriginal Astronomy, how her great ancestors utilised the sky in many different ways.

Kirsten loves to share her passion of space and astronomy. Her debut began when COSMOS Magazine published a profile on her in February 2017. Following this, she has been included in many newspaper and web articles from the Sydney Morning Herald, the Australian, and ABC News. Kirsten has also spoken on countless radio programs such as Triple J’s Drive and Hack programs, as well as around the country on numerous ABC programs. She is also the astronomer in residence on Triple M’s Night Shift, and 2SER’s weekend breakfast show. Kirsten has been seen on television expressing the latest space news on Jones + Co show on SKY News, as well as on Studio 10. She’s even been on a Japanese Documentary called Cosmic Front: Next. While Kirsten does love to reach out to the media, her passion lies in communication to the public. She has spoken publicly on many occasions during National Science Weeks, NAIDOC Weeks and at countless schools. Kirsten is also a 2017 CSIRO Indigenous STEM Award finalist.