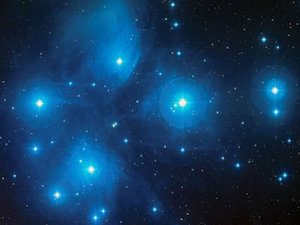 Aboriginal and Torres Strait Islander people were, and continue to be, careful observers of the stars. The stars are the homes of ancestors, animals, plants, and spirits. The stars serve as calendars, a law book, and inform all aspects of daily life and culture. The First Australians observed the properties of stars (such as brightness, colour, and position) and noticed even the most subtle changes in these properties. Ancestor spirits in the sky serve as a law book and mnemonic for the people to remember important life and social lessons.

The Dhui Dhui (pronounced Doo-ee Doo-ee) Story appears courtesy of Russell Butler, of the Bandjin (‘Saltwater’) people from Hinchinbrook Island and Lucinda Point on the adjoining mainland of north Queensland, as well as Gould and Garden Islands and part of Dunk Island.

Long ago, two boys paddled out in a canoe south of Dunk Island (Coonangalbah) and dropped their stone anchor to fish.  The elders had warned them not to fish on that sand spit because there was a big dangerous shovelnose ray (Dhui Dhui) that lived there.  But the boys were defiant and fished there anyway. As they fished, the ray bit their line and started to tow them around in the canoe, but the boys wouldn’t let go of the line. It towed them around the ocean for a while before going down the Hinchinbrook channel. They disappeared into the horizon. By then, it was getting dark and everyone was worried about the boys. As the people looked south after sunset, they saw the Southern Cross rising, which was Dhui Dhui (the shovelnose ray), followed by the two Pointer stars (the two boys in their canoe).

Aboriginal people have been using the stars as indicators of seasonal change for thousands of years.  In the following series of blog posts, I will show you how this was done in some depth. Today, we begin with the brightest star in the constellation Bootis, a red giant called Arcturus.

Our first example comes from the Yolngu people of Arnhem Land.  When the star Arcturus appears in the dawn sky (just before sunrise), the Yolngu people begin harvesting the corms of the spike-rush. The spike-rush (Eleocharis dulcis), also called the rakia, water chestnut, or gulach (Figure 1), is a grass-like sedge with an edible tuber, which can grow to a height of over 1.5 m and is found across northern Australia. The plant had numerous uses for Aboriginal people, which included making baskets or fish-traps from the grass-reeds or eating the carbohydrate-rich tubers. The growth rate of the spike-rush is dependent on the level of rainfall, with the tubers growing when the water saturates the top several centimeters of soil. Because Arnhem Land has a monsoonal climate with wet and dry seasons, the tubers are generally harvested during the wet season when the rains have provided sucient rain for the growth of the tubers.

Approximately 90% of the annual rainfall in northern Australia (~0.9-1.2 m) occurs during the summer months of November to April. Therefore, the tubers of the spike-rush are harvested after the start of the wet season, roughly in late November when Arcturus is about 10 degrees above the horizon at sunrise. One of the interesting aspects about linking calendars with the stars is that the stars are gradually moving over time. Stars move with respect to each other as they orbit the centre of our galaxy (which we call stellar proper motion). As they orbit, their distances to us change, which affects their brightness. Stars also change their position with respect to the horizon as the earth wobbles on its axis due to precession. This means that the rising and setting positions of the stars at certain times of the year will gradually change over time.  Because of the effects of precession, Arcturus would not have been a useful indicator star for the harvesting of the spike-rush over 7,000 years ago.  This means that prior to that time, Aboriginal people would have used a different star. We do not know what star they used, but prior to 7,000 years ago, the bright star Antares in the constellation Scorpius would have been suitable.

Our second example comes from the Wergaia people of western Victoria. In Wergaia traditions, Marpeankurrk was a woman who lived in the mallee scrub.  One day, she was in the bush looking for her food. Her people were starving. It had not rained for a long, long time. Rivers and billabongs had disappeared – the bul-rushes had shrivelled up and died! She lifted up logs but could find no lizards or snakes. She looked around and saw that there were also no grass seeds or fruit to eat.

After walking for many hours she saw a wood ant’s nest. So desperate was she that she went to it and opened up the nest with her digging stick. In the nest she saw thousands of larvae. She put one in her mouth and ate it. The larvae were delicious! She collected all that she could and hurried back to her people. The larvae of the wood ant saved the people. It soon became their favourite food. When Marpeankurrk died she went up into the sky and became the star Arcturus. When Marpeankurrk appears in the northern evening sky, the Wergaia people begin collecting the larvae of the bittur (wood ant).  The larvae were an essential food source during the winter months of August and September.

When Arcturus sets just after the sun, the larvae are gone and summer (Cotchi) begins. Arcturus is ~30 degrees above the northern horizon at sunset as seen from this region at the beginning of August and sets just after sunset by the beginning of October – the beginning of the summer months. The northerly position of Arcturus in the Victorian sky (due to the higher latitude of Victoria) means that Arcturus remains relatively low, never exceeding 33 degrees above the horizon.  Because of this, Arcturus will rise and set over the course of 10 hours, less than a full winter’s night.  But as with the Yolngu, Arcturus would not have been a useful star for denoting this period more than 7,000 years ago.

This shows us that Aboriginal sky knowledge gradually changes as the cosmos evolves.

Aboriginal and Islander people paid special significance to all stars, from the brightest in the sky to those barely visible. Each community has their own views about the stars. The Kaurna people of Adelaide use the stars (in part) to predict seasonal change.

The Kaurna people use particular bright stars govern seasons. For example, autumn (Parnatti) is signaled by the morning appearance of the star Parna (Formalhaut). This warns the Kaurna that the annual autumn rains will soon arrive and that they need to build large, water-proof huts. Summer (Woltatti), the hot season, is governed by Wolta, the wild turkey constellation, and Spring (Willutti) is under the influence of Wilto, the eagle star. Winter (Kudlilla), the rainy season, was not associated with any particular star in the records.

Tinniinyaranna are the stars of Orion (most likely the Belt and scabbard, as with many Aboriginal cultures), representing a group of boys who hunt kangaroo and emu on the celestial plain. The Mangkamangkaranna (the Pleiades star cluster) represents a group of girls digging roots. The red star Madletaltarni (probably Betelgeuse or Aldebaran), is the mother of the Tinniinyaranna, and Parnakkoyerli is the father, possibly Rigel. Betelgeuse and Rigel flank the boys on either side.

Aboriginal people even observed the slow, subtle changes in brightness of three red giant stars in the sky. New research, recently published in The Australian Journal of Anthropology, reveals that Aboriginal oral traditions describe the variable nature of Betelgeuse, Aldebaran and Antares. This challenges the history of astronomy and tells us that Aboriginal Australians were even more careful observers of the night sky than they have been given credit for.

A Kokatha oral tradition from the Great Victoria Desert tells of Nyeeruna, a vain hunter who comprises the same stars, in the same orientation, as the Greek Orion. He is in love with the Yugarilya sisters of the Pleiades, but they are timid and shy away from his advances. Their eldest sister, Kambugudha (the Hyades star cluster), protects her younger sisters. Nyreeuna creates fire-magic in his right hand (Betelgeuse) to overpower Kambugudha, so he can reach the sisters. She counters this with her own fire magic in her left foot (Aldebaran), which she uses to kick dust into Nyreeuna’s face. This humiliates Nyreeuna and his fire-magic dissipates. Nyreeuna is persistent and replenishes his fire-magic again to get to the sisters. Kambugudha cannot generate hers in time, so she calls on Babba (the father dingo) for help. Babba fights Nyeeruna while Kambugudha and the other stars laugh at him, then places a row of dingo pups between them. This causes Nyeeruna much humiliation and his fire-magic dissipates again.

The story explains the variability of the stars Betelgeuse and Aldebaran. Trevor Leaman and I realised this in 2014, but we did not realise until now that the story also describes the relative periods of these changes. Betelgeuse varies in brightness by one magnitude every 400 days, while Aldebaran varies by 0.2 magnitudes at irregular periods. The Aboriginal people recognised that Betelgeuse varies faster than Aldebaran, which is why they say that Kambugudha cannot generate her fire-magic in time to counter Nyreeuna.