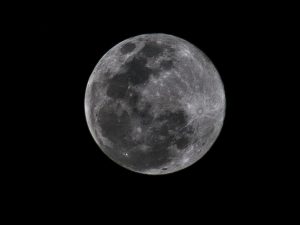 In most Aboriginal cultures, the Sun is a woman and the Moon is a man. Some Aboriginal communities describe the Sun woman pursuing the Moon man across the sky from day to day, occasionally meeting during an eclipse.
The Yolngu people call the Moon Ngalindi  and he too travels across the sky. Originally, he was a fat lazy man (corresponding to the full Moon) for which he was punished by his wives, who chopped bits off him with their axes, producing  the waning Moon. He managed to escape by climbing a tall tree to follow the Sun, but was mortally wounded, and died (the new Moon). After remaining dead for 3 days, he rose again, growing round and fat (the waxing Moon), until, after two weeks his wives attacked him again. The cycle continues to repeat every month. Until Ngalindi first died, everyone on Earth was immortal, but he cursed humans and animals so that only he could return to life. For everyone else, death would thereafter be final.
But the Arnhem Land stories go much further, even explaining why the Moon is associated with tides. When the tides are high, water fills the Moon as it rises. As the water runs out of the Moon, the tides fall, leaving the Moon empty for three days. Then the tide rises once more, refilling the Moon. So, although the mechanics are a little different from our modern version, the Yolngu people obviously had an excellent understanding of the motions of the Moon, and its relationship to the tides. (Source: Ray Norris)
A story from Cape York tells us how the Moon formed. Many years ago, people realised that a light was needed at nighttime because they found it difficult to walk around or to hunt. The Sun lit up their daytime – something was needed to light up the night. They held a big meeting and one idea was to collect a huge pile of firewood during the daytime hours and setting fire to it just as the Sun set. People thought that the fire would be big enough to light up the bush so that they could hunt and walk around and have corrobores. Most of the people thought that this idea was impractical.
One member of the community had great idea: why not make a special boomerang that would shine, throw it high in to the sky and at night this boomerang would give enough light to allow people and animals to see at night. They made a giant boomerang. People tried to throw it high into the sky. They tried but they just couldn’t throw it high enough. Then, a very thin, old, weak man stepped forward and politely asked if he could try. Everyone laughed at him when they saw his weak, thin arms. One of the elders was a kind and wise man and he said the old man should be allowed to throw the boomerang.
And throw the boomerang the old man did! It went higher and higher and higher and finally stayed up in the sky as the Moon, shining down onto the people. The shape of the boomerang can still be seen in the Moon every month. (Source)