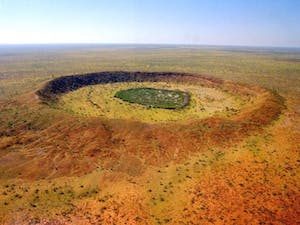 Australia is home to some 30 confirmed craters that formed from the impacts of comets, asteroids, and meteorites. These range in age form a few thousand years to over a billion years. Some of these craters are featured in Aboriginal traditions that describe their formation. These include the Henbury craters, Wolfe Creek Crater, Gosse’s Bluff crater, and Liverpool crater.
Many Indigenous cultures attribute meteoritic events to the power of sky beings. The Wardaman people of northern Australia tell of Utdjungon, a being who lives in the Coalsack nebula by the Southern Cross. He will cast a fiery star to the Earth if laws and traditions are not followed. The falling star will cause the earth to shake and the trees to topple. The Luritja people of Central Australia tell of an object that fell to Earth as punishment for breaking sacred law. And we can still see the scars of this event today.

Around 4,200 years ago, a large nickel-iron meteoroid came blazing across the Central Australian sky. It broke apart before striking the ground 145km south of what is now Alice Springs. The fragments carved out more than a dozen craters up to 180 meters across with the energy of a small nuclear explosion. Today, we call this place the Henbury Meteorites Conservation Reserve.

Aboriginal people have inhabited the region for tens-of-thousands of years, and it’s almost certain they witnessed this dramatic event. But did an oral record of this event survive to modern times? When scientists first visited Henbury in 1931, they brought with them an Aboriginal guide. When they ventured near the site, the guide would go no further. He said his people were forbidden from going near the craters, as that was where the fire-devil ran down from the sun and set the land ablaze, killing people and forming the giant holes. They were also forbidden from collecting water that pooled in the craters, as they feared the fire-devil would fill them with a piece of iron.

The following year, a local resident asked Luritja elders about the craters. The elders provided the same answer and said the fire-devil “will burn and eat” anyone who breaks sacred law, as he had done long ago. Thus, the story of Henbury indicates a living memory of an event that occurred over four thousand years ago.

175 km west of Alice Springs lies a 5 km-wide ring-shaped mountain range that stands 150 metres above the desert. Geologists call it Gosses Bluff, but the Western Arrente call this place Tnorala and consider it sacred. Aunty Mavis Malbunka, the Traditional Custodian of Tnorala, explains the origin of feature in Arrernte traditions.

In the Dreaming, a group of sky-women danced as stars in the Milky Way.  One of the women, who was carrying a baby, grew tired and placed her baby in a wooden basket, called a turna or coolamon. As the women continued dancing, the turna fell and the baby plunged into the earth. The baby struck the earth and was covered by the turna, the force of which drove the rocks upward, forming the circular mountain range we see today. The baby’s mother, the evening star, and father, the morning star, continue to search for their baby to this day.  She continues:

“We tell the children don’t look at the evening star or the morning star, they will make you sick because these two stars are still looking for their little baby that they lost during the dance up there in the sky, the way our women are still dancing. That coolamon, the one the baby fell out of, is still there. It shows up every winter.”

The coolamon is the Western constellation Corona Australis – the Southern Crown. It looks like a coolamon tumbling out of the Milky Way.

Wolfe Creek Crater is one of the best-preserved and most spectacular meteorite craters in the world. It is situated in the Kimberley region of Western Australia, approximately 130 km south of Halls Creek, on the edge of the Great Sandy Desert.

The crater is known as “Kandimalal” in the Djaru language. It is recognised in oral traditions, personal experience, knowledge, art, and song by Djaru and other Aboriginal people. Djaru Elders refer to several stories relating to the crater. One refers to the passage of two rainbow snakes, which formed the nearby Wolfe Creek and Sturt Creek as they crossed the desert. In the Dreamtime, one snake emerged from the ground, forming the circular crater.

In 1999, John Goldsmith recorded a story about a “star” that fell from the sky and became buried in the ground, forming the crater. According to Djaru Elder Jack Jugarie, one day, the crescent moon and the evening star passed very close to each other. The evening star became so hot that it fell to the ground, causing an enormous explosion, flash, dust cloud and noise. This frightened the people and a long time passed before they ventured near the crater to see what had happened. When they ventured to crater, it was realised that this was the site of where the evening star had fallen to the Earth. The Djaru people then named the place “Kandimalal” and is prominent in arts from the region.

Other craters are discussed in Aboriginal traditions, such as Liverpool and possibly Dalgaranga.

There are also many traditions about objects falling from the sky that are not known to scientists. This means many more craters and locations of meteorite falls probably exist across Australia that are not known outside the communities. Many papers have been written on these topics, which you can explore below.