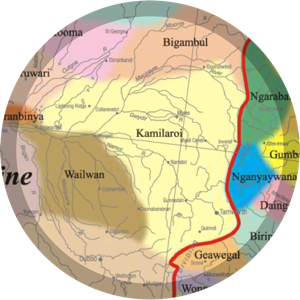 The Kamilaroi and Euahlayi peoples, and their neighbours, the Murrawarri and Ngemba, are an Aboriginal cultural grouping located in the northwest and north central of New South Wales. Their cultures were recorded by early explorers, linguists, and ethnographers from the mid-1800’s.  As a result, we have some knowledge about their cultural astronomy from the literature, and more recently, from an academic project to collect stories from knowledgeable persons of those language groups. Combining the literature with the collected stories has allowed the researchers to establish complete stories about various cultural objects in the sky, some of which have not been known beyond the culture persons of these language groups.

Other than the Moon, the brightest object in the night sky in Australia is the Milky Way, which can stretch from horizon to horizon in a dark sky.  For the Kamilaroi and Euahlayi, this is the Warambul, meaning watercourse or river, and the place where everything once was, until the Universe was turned upside down and everything ended up on Earth.  Many of the creation beings are still to be found in the Warambul, and many objects and stories have mirror places on Earth.  Behind the Milky Way is Bulimah, the sky camp, where persons go after their life on Earth.

In the Milky Way are a number of important culture objects.  The most obvious is the Emu in the Sky, the spirit Emu, Gawarrgay, who stretches from its head in the Coal Sack under the Southern Cross, to the body in Scorpius.  Depending on the time of year, the Euahlayi People see the Emu with or without legs, and the Emu has strong connections to resource management and ceremony.  Under the Emu is Bandaarr, the Kangaroo, who faces away from the Emu, and also has strong ceremonial links.

The two dwarf galaxies so obvious in a dark sky from Australia, the “cotton-ball” Large and Small Magellanic Clouds in the sky near the Southern Cross, are known as Brolgas (a large bird), or burraalga (Kamilaroi)/parrulka (Euahlayi), but the SMC is also a Wiringin or “clever man”, who separates deceased persons into initiated and non-initiated (who are reborn).

The Southern Cross is important in Kamilaroi and Euahlayi ceremony, as it has a strong link to the story of when the first man died, and the dark space (Coal Sack) is the hole in the dead tree (Yaraan or Gulabah, depending on language group) through which Bulimah is reached.  The Pointer stars (Alpha and Beta Centauri) are two cockatoos (Muraay/Muyaay) who were roosting in the tree when it was lifted into the sky.  In the same area is the star, Alpha Muscae (which is the large Federation star on the Australian flag).  This is the camp of the culture hero, Baayami, which is now kept by one of his wives, and is the place where everyone goes before going to Bulimah.  Women with children on Earth stay here until they are joined by their last daughter.  Another star in the region, Canopus, is called Wamba (crazy), perhaps because it twinkles when near the horizon.

Orion and the Pleiades

On the other side of the sky during the Australia summer, Orion and the Pleiades are visible.  Like many other cultures on Earth, the Pleiades star cluster is thought to be seven young women, the Miyay Miyay (the Greeks said “Seven Sisters”).  For various reasons, they ended up in the sky, where their parents in the Snowy Mountains could see them.  They were loved by some young men, the Birray Birray, who chased them, and they eventually ended up in the sky, as well, as the three stars that make up the Belt of Orion.  To keep the Birray Birray from reaching the Miyay Miyay, a Wiringin, Wamba Wamba, was placed between them.  He is the star Aldebaran, and the inverted “V” (the horns of Taurus) is his gunya, or shelter.

Scorpius runs across the centre of the Milky Way, and is seen to be a scorpion by the Kamilaroi and Euahlayi Peoples.  It is also home to Warrawilbaarru, or Wilbarr, a spirit banished to the sky by Baayami.  Wilbarr can only come to Earth in the period October to March, and can come through one of three dark patches (dark nebulae) in Scorpius.  When he comes to Earth, he is the spirit of the whirly wind (Wilbarr is probably the source of the word “willy willy”), and young people and women avoid him.

The Sun, Moon, and Planets

While not on the planispheres, Venus and Mars, when together in the sky, are the eyes of Baayami (through the Eaglehawk, Maliyan.ga). On its own, Venus is Gindamalaa, which means “you are laughing”, and this is connected to a story of a man with inappropriate behaviour to women. Bahloo is the Moon, and is a male figure. Yarai is the Sun, and is female. 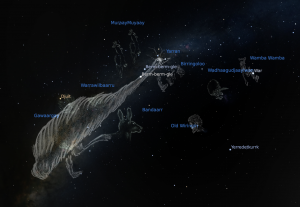 Traditional Kamilaroi astronomical knowledge was collected and published by Robert Fuller in 2014 and 2015 for his MPhil degree. He worked closely with a number of Kamialroi and Euahlyi elders and community members, including Uncle Ghillar Michael Anderson. Fuller and Uncle Ghillar worked together closely to develop constellations for Stellarium.

This package was part of the ‘Giving Back’ of the collected knowledge to the Kamilaroi and Euahlayi communities in the form of a documentary video (Star Stories of the Dreaming) and a student Study Guide. Clips from the Stellarium were used in the documentary to illustrate certain sky objects.

Star maps and travelling to ceremonies: Euahlayi People and their use of the night sky
by Robert S. Fuller, Michelle Trudgett, Ray P. Norris, and Michael G. Anderson
Journal of Astronomical History and Heritage, Vol. 17(2), pp. 149–160, 2014.

The Astronomy of the Kamilaroi and Euahlayi Peoples and their Neighbours
by Robert S. Fuller
MPhil Thesis, Macquarie University, 2015

Star Stories of the Dreaming: An Education Guide 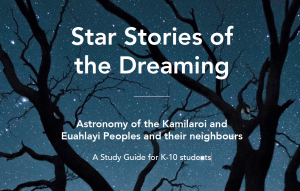 The teaching and learning activities in this guide are designed to support quality teaching of Aboriginal perspectives within the NSW K-6 Science Syllabus, with a focus on the Kamilaroi and Euahlayi peoples. Whilst the activities have been created with Stage 2 and 3 students in mind, the content of the guide provides understanding that woul d enrich conversations about Aboriginal histories and cultures, and can be tailored to suit K-10 students. 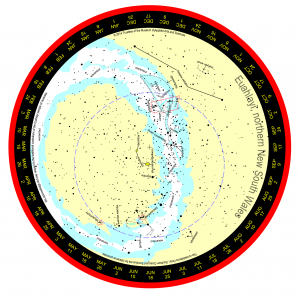 Planispheres – also known as star wheels – are a handy educational took to show you what it up in the sky at a certain time on a certain date. Two star wheels were developed that feature Kamilaroi and Euahlayi constellations and star names, along with an education brochure. The star wheels are A3 in size and can downloaded as a PDF, printed, then combined with any similar southern hemisphere star wheel of the same size.

Star Stories of the Dreaming: A Film